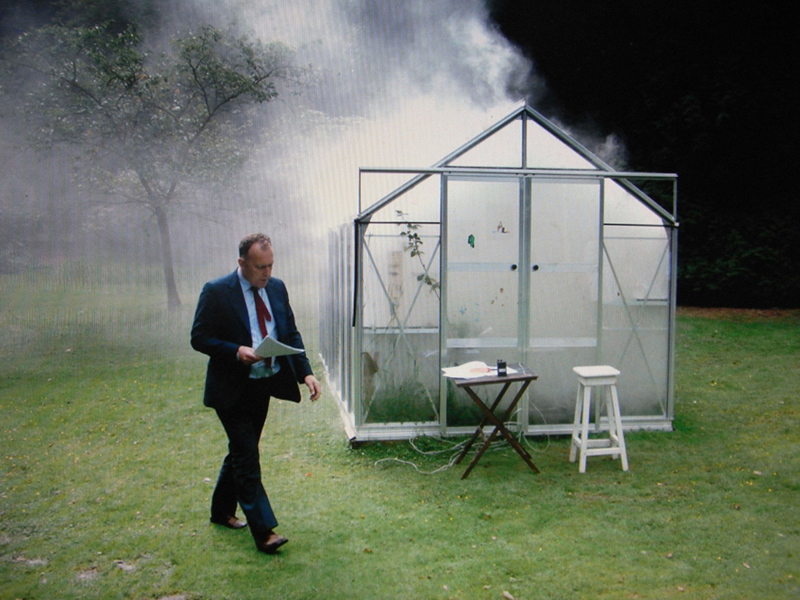 Late one afternoon. A short autobiographical happening concerning fire and glass structures. A greenhouse full to overflowing with smoke, it leaks from the inside. Smoke is one of the main purgative cleansers used in horticulture; it has a history that goes back to the Romans. I have a love hate relationship with market gardening going back fifty years including incidents with, amongst others, DDT, Alexandra Palace, the US Marine Corps and acres of lettuce.

I studied Fine Art at Middlesex Polytechnic. At that time the college was housed in one wing of Alexandra Palace, in North London.

Alexandra Palace, “ally pally” was built in 1873 as a north London response to the Crystal Palace, which in the Victorian era dominated the hills of South London. The Crystal Palace cost a penny to go round and it wasn’t open on Sundays which was the only day off for most working people. Alexandra Palace was free to enter and was open all year round. For this reason Ally Pally was known in the advertising jargon as “the Peoples Palace”.

Twelve days after Alexandra Palace opened to record attendances, it caught fire and was destroyed. Two years later it was rebuilt. It was to this magnificent copy that I went as a student.

The light in the glass-roofed studios was fantastic; the views from the balcony across central London to the hills of the southern weald were phenomenal. We could see, and be seen from all of North London. I felt I had an Olympian view over the capital.

I loved the environment, the parties and the people.  The college had a punk energy with a smattering of hippy utopianism left in it. Each day I drove from my small flat in Brixton up through the centre of London, continuing North against the commuter flow, to Ally Pally, an omnipresent beacon on the horizon. By the end of the first year I no longer felt that I was a young man in shorts, up from the country, I was grown up and an integral part of London life.

During the summer break I carried on going in to college. I’d had a part time job all through the year, so my routine was pretty much as it had been in term time, better in fact as their were no other students there, access to tools, equipment and staff was far easier. There was bonhomie amongst those there. A perfect situation.

I brought all my work in from home, set it up to see how it looked and what needed doing, where I should add and what work I should remove. This took a couple of days by the lunchtime of the third day I was happy, my jobs list for the summer prepared, I went down into Crouch End to collect some glass.

As I left the shop I noticed a small plume of smoke coming from the back of the palace. By the time I walked up the hill this plume had become a large cloud. For the last few hundred yards I ran to the top of the hill, I arrived as the terrified office staff were coming out of the building into the car park. The main dome of the palace was on fire, smoke was pouring into the west wing, the college.

They wouldn’t let me go in to gather up my stuff. Within twenty minutes we watched as the fire spread to the college. All my work, all the drawings, all the photographs, all my notebooks that I had ever produced were in that building. Fortunately I was still holding my camera, I took a couple of photographs. As we were being forced by the police to evacuate the area I drove home.

By six o’clock the fire was the main item of the BBC news, covered the whole front page of the Evening Standard and all the next days papers. No one was hurt but the whole complex had been completely destroyed. Naturally I wasn’t insured, the college eventually compensated me for the cost of the negatives and paper that I had lost, it was worked out that all my artwork was worth £1.73.

The Alexandra Palace was rebuilt five years later. I have been back to the building once; it has become a conference centre with linked hotel, but the view is the same.

In 2007 Arcade Fire played two sell out gigs in the main dome.