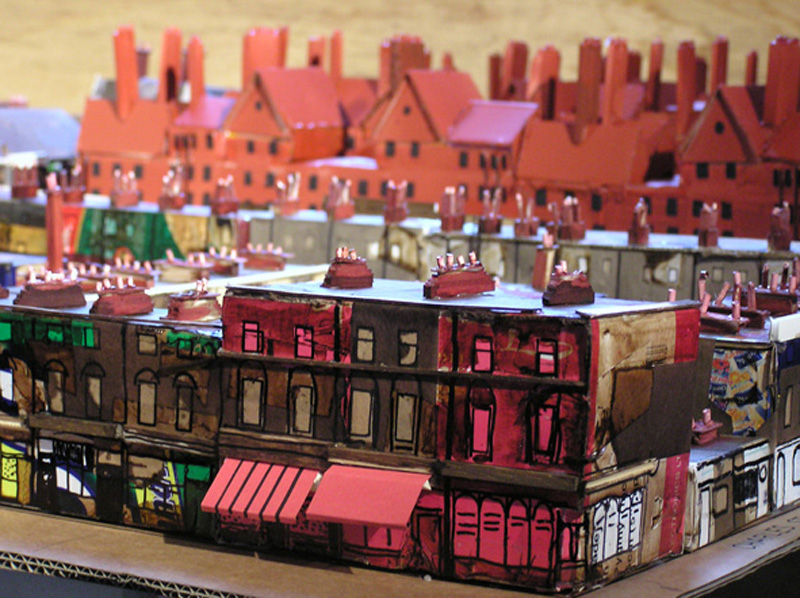 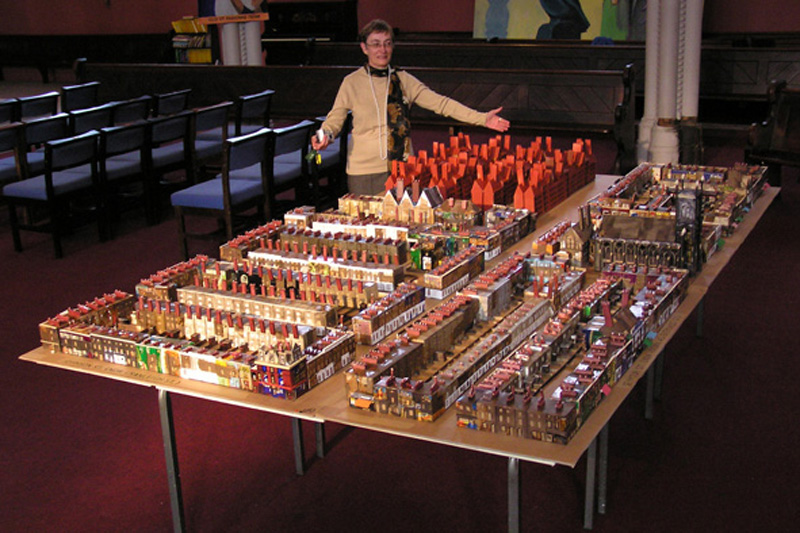 A scale model of the area built with a group of ninety-year olds from their disused medication packaging. Hillwood Community Centre, Kings Cross, London. In association with Age Concern Camden.

One day, out of the blue, I was asked by Age Concern Camden if I could work with a drop-in group. Ten 90 year old members of Hillwood, a ‘community resource’ in Somers Town area of Kings Cross. The group were having difficulties building a model of the neighbourhood in the 1920’s: the time of their collective adolescence and young adulthood. The time “before the area got run down. When you didn’t need to lock your door, or anything like that, you felt safe. Real community.”

It transpired that the problem they were having was that they didn’t want to make a model at all, too fiddly, they just wanted to talk together, have a nice cup of tea and a bit of cake. When one of the care workers suggested that I could build the model for them, they were really chuffed and visibly relieved. They promised me lots of tea and cake in return. All I asked of them was that they bring with them to the next Tuesday meeting any waste cardboard packets that they might have around their homes.

I love to use any packets from around my kitchen for drawing or writing on. The reverse, unprinted sides of most commercial cardboard is perfect for pencil, biro and gouache paint. It is thin and folds well. What I hadn’t anticipated was how many boxes this small group would accumulate each week, mainly medicine packaging. One particular pill packet, long, narrow and white was the perfect medium for building model houses. The scale was perfect. The group had lots of these.

For five months, every Tuesday afternoon sat at ‘Jonathans’ Table’ with photos, maps and a mound of biscuits I made repetitive models of rows of back-to-back dwellings.  Around me the group argued, chatted discussed the different houses, shops, roads and who’d lived there, what had happened etc. Sentimental, shocking, grim at times but stories told with fantastic energy and the most wicked, incisive humour.

On Tuesday mornings I would go to the library, read up on Somers Town in the Local History Archive. Because the area was squeezed between Kings Cross and Euston mainline stations, there was a lot of default information on its development. Historically it was seen as an area of inner city poverty. Used as the notable example of dereliction, crime and misery by political and religious groups for almost all of the past three centuries. Ironically the1920’s was the time of the worst urban poverty, just before slum clearance and the aerial bombing of the second war cleared much of the space for new development.

There were also were a few photographic surveys done of the area. One in 1919 was concerned with the state of the housing stock, which was fortunate for me because it was very thorough. Fortunate not for the fine detailing of the model, there are limits to what you can achieve with pill packets, but because I could refer the group to copies of the photos when disputes arose over which shop, which street, house, pub was next to another. The cardboard model, photos and my sketched maps became something to be pored over. People outside the group came into point things out, accuracy was questioned, a new discussion would start. BBC radio journalists became interested in the group, the British Library too.

By the sixth month the model had begun to outgrow its table top origins. It was in need of a bigger and more accessible home. Father Rob, vicar of St Mary’s, the overbearing church next door said he could give the model a temporary site. We grabbed the opportunity. Rob’s offer to bless the model was tersely rejected by the group, a bitterness carried over from the time when Oxford students destined for the clergy would come to Somers Town in their holidays to help ‘the poor and wretched’. A compromise coffee morning was arranged. Josie, the centre manager and generally overworked soul, officially launched the public viewing on a beautiful summers  day in June 2004. 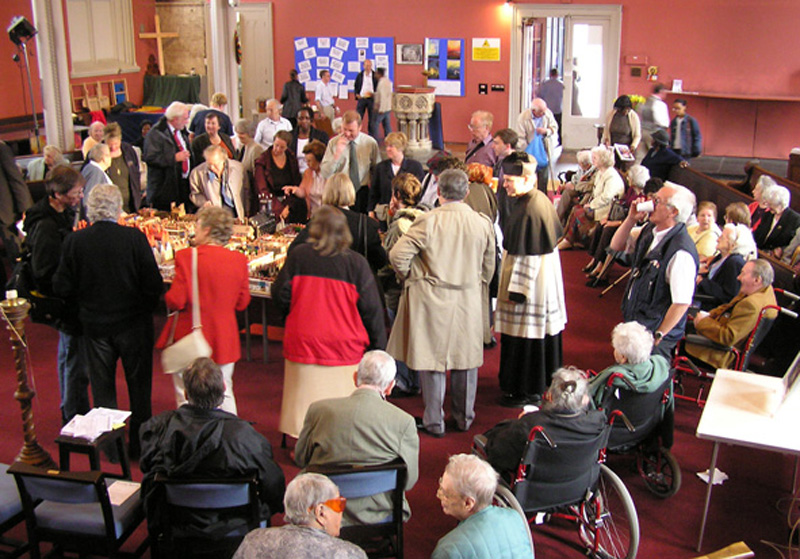